Time: 2:30 PM – 4 PM
Location: Japanese Stone Lantern at the Tidal Basin at Independence Avenue and 17th Street S.W. (Map)
NCSS-Stone-Lantern-Toho-Koto615x156
Jointly sponsored since 1954 by National Conference of State Societies (NCSS) and the National Park Service National Capital Region, this venerable observance opens the NCSS Cherry Blossom Princess festivities. The ceremony features traditional Japanese music, the presentation of the United States and Japan Cherry Blossom Queens, along with the 2015 Cherry Blossom Princesses, and remarks by a number of dignitaries, including the Ambassador of Japan to the United States.
The Japanese Stone Lantern was carved nearly four centuries ago to honor the Third Shogun of the Tokugawa period. It stands 8.5 feet tall and weighs 4,000 pounds. In 1954, the lantern was moved from Japan and presented to Washington DC as a gift commemorating the 100th anniversary of the first treaty between the two countries. Since then, the Stone Lantern has been lit once each year by the Cherry Blossom Princess representing the Embassy of Japan—and only during the National Cherry Blossom Festival®.
Parking at the Tidal Basin is limited. The nearest Metro stop to the Lantern site is the Smithsonian station, just across the Kuntz Bridge. Seating for more than 500 will be available.
Ticket Information: Free Event
Getting There
METRO: Smithsonian Use the Trip Planner
Contact Information 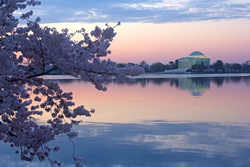