Funding still down from 2008 levels – more is needed to help end the epidemic.

A new report by Funders Concerned About AIDS (FCAA) revealed that global private funding for HIV totaled US$ 618 million, an 8% increase (US$46 million) from 2013.

The 2014 increase was driven by significant increases from the top two funders, the Bill & Melinda Gates Foundation and Gilead Sciences, Inc. This influence is reflective of the ongoing overall concentration of HIV/AIDS philanthropic funding among the top donors: the top 20 funders accounted for 81% of all funding in 2014. Overall, funding has been holding relatively steady around the $600-650 million mark for the past eight years.

“While we celebrate this encouraging headline, the full story is more complex,” said John L. Barnes, FCAA Executive Director. “Despite the overall increase, private philanthropic funding for HIV/AIDS is still down 8% from the high water mark set in 2008 ($674 million), even at the height of the global economic crisis.”

FCAA’s 13th annual resource tracking report, launched today at the FCAA 2015 AIDS Philanthropy Summit, is the most comprehensive study of its kind, capturing data on more than 6,000 grants awarded by 228 foundations in 10 countries in effort to identify gaps, trends, and opportunities in HIV-related philanthropy.

Other key findings:
The Bill & Melinda Gates Foundation, Gilead Sciences, Inc., M.A.C AIDS Fund, Wellcome Trust and the Ford Foundation ranked as the top five philanthropic HIV funders in 2014. Most funding ($262 million) went to grants with a global (non-country-specific) reach. The increase in funding from 2013 to 2014 was mostly directed to the U.S. domestic epidemic and almost entirely attributable to increased contributions to the U.S. from one funder (Gilead Sciences,Inc,). This brings private philanthropic funding for HIV/AIDS in the U.S. to a new high of $139 million in 2014, making it the top recipient country of private funding. The top region outside of the U.S. to receive private philanthropic funding was East & Southern Africa ($114 million).

FCAA’s revised methodology included a first-ever attempt to analyze individual grants submitted by private funding organizations. This yielded the first snapshot of target populations and strategies per region. In parallel, FCAA also launched an update to its new searchable online map – http://www.aidsfundingmap.org – that provides 2014 private funding and top funders per region, country, and by U.S. state. FCAA plans to share additional reports on funding for key issues or populations over the course of 2016.

According to UNAIDS, in order to substantially bend the curve toward ending the epidemic in low- and middle-income countries (LMIC) by 2030, a 76% increase in investment is needed between 2014 and 2020 (from $20.2 billion in 2014 to $35.6 billion by 2020). According to their modeling, UNAIDS asserts that this level of investment will not only allow for financial savings in years beyond 2020 by reducing new infections (by 28 million), it will reduce AIDS-related deaths by 21 million. In 2014, philanthropic resources to LMIC totaled $439 million, or 2% of global resources available, and is far from what will be needed each year to curtail the epidemic. The issue of HIV seems to be a low priority among the broader U.S-based philanthropic community, with only 71 cents of every US$100 awarded by U.S. foundations and charities going to HIV issues.

“We hope that funders, stakeholders, and grantees will find the new grant-level data to be a valuable tool to reestablish urgency in the philanthropic response to HIV/AIDS, and to build on evidence-based strategies that target those most in need in the places most impacted,” said Barnes. “We hope that in 2020 we can look back to the small increase reported in 2014 as the first in a series of steadily increasing steps toward meeting the ambitious goal of ending HIV/AIDS.”

Download Philanthropic Support to Address HIV/AIDS in 2014 at http://www.fcaaids.org/resourcetracking

About FCAA: Funders Concerned About AIDS (FCAA) was founded in 1987 with the mission to mobilize the philanthropic leadership, ideas and resources of funders to eradicate the global HIV/AIDS pandemic and to address its social and economic dimensions. 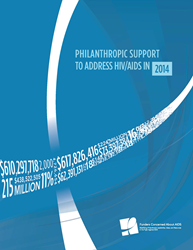