Arlington, VA, May 4 – Preparing to combat that time of year when, according to the National Highway Traffic Safety Administration (NHTSA), over one-third (33.8%) of all U.S. traffic deaths involve drunk drivers*, free cab rides will be offered to wouldbe drunk drivers throughout the Washington-metropolitan area on the Mexican holiday, Cinco de Mayo (May 5th).

Offered by the nonprofit Washington Regional Alcohol Program (WRAP) and announced at a bilingual (English & Spanish) news conference this morning at Fuego Cocina y Tequileria in Arlington, the Cinco de Mayo SoberRide® program (now in its second year after being inaugurated in 2015) will be in operation beginning at 4:00 pm tomorrow, Thursday, May 5, 2016 and continue until 4:00 am on Friday, May 6, 2016 as a way to keep local roads safe from impaired drivers during this traditionally high-risk holiday.

During this 12-hour period, area residents celebrating with alcohol may call the toll-free SoberRide® phone number 1–800–200–TAXI (8294) and be afforded a no-cost (up to a $ 30 fare), safe way home. AT&T wireless customers can dial #WRAP for the same service.

Local taxicab companies throughout the Washington-metropolitan area provide this no-cost service to local residents age 21 and older who otherwise may have attempted to drive home after drinking.

“According to government figures, over a third of U.S. highway deaths on Cinco de Mayo involve drunk drivers,” said Kurt Gregory Erickson, WRAP’s President. “Worse, nearly a fifth of these drivers involved in fatal crashes had blood alcohol concentration levels of .15 or higher.”

At today’s news conference, officials with the Virginia Department of Motor Vehicles unveiled 2015 traffic data showing a more than seven-percent (7.57%, 700 > 753) increase in highway fatalities occurring in the Commonwealth last year reversing a previous two year decline in such deaths. Conversely, DMV data showed that alcoholimpaired driving fatalities in the state decreased by five-percent (5.12%) last year. In 2015, more than 20,000 (20,768) persons were convicted of driving under the influence in Virginia. 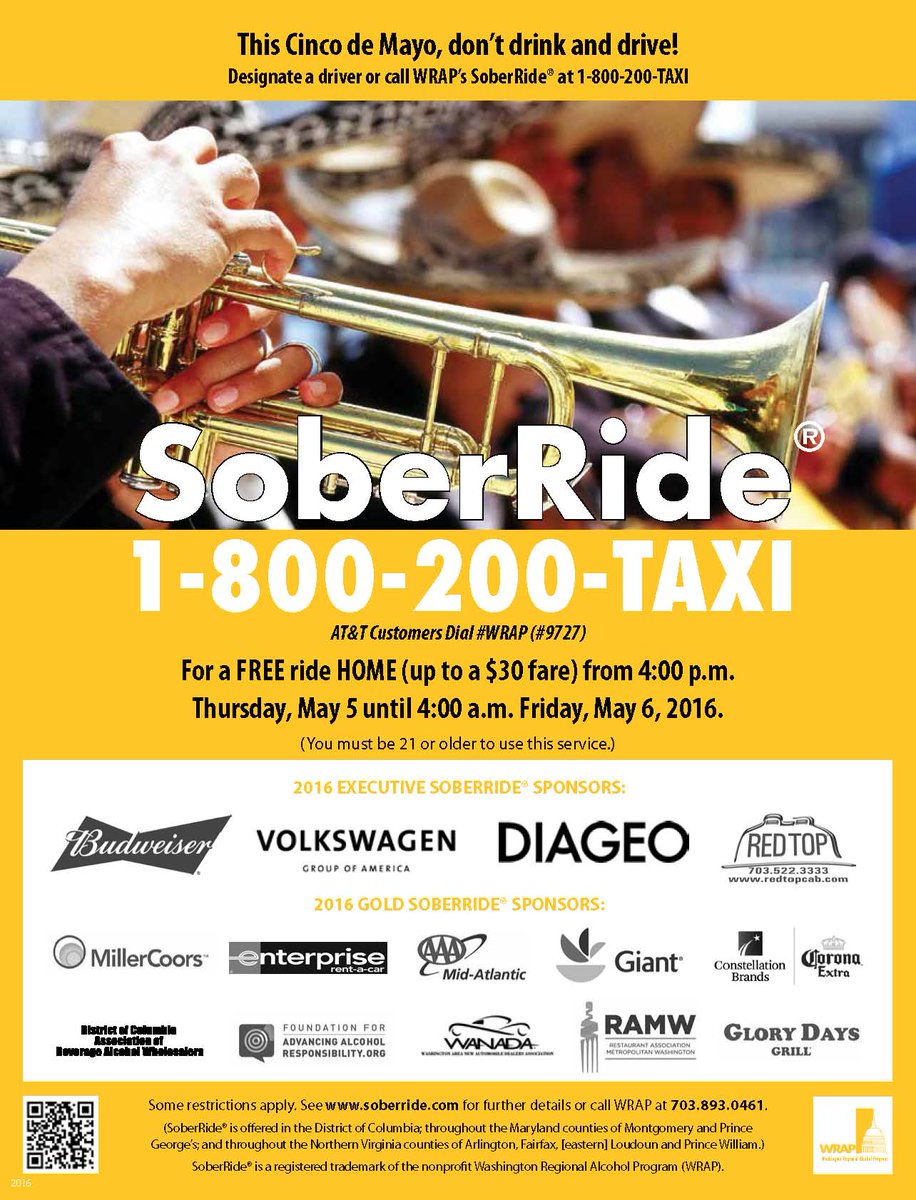 Previous post Free Viewing Party of Round Two Game 4 Between Capitals and Penguins in Pittsburgh at Verizon Center on Wednesday May 4th
Next post Hello world!