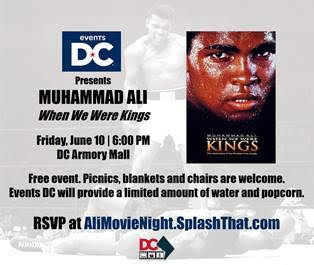 EVENTS DC TO HOST MUHAMMAD ALI TRIBUTE SCREENING
A Free, Pop-Up Viewing of “When We Were Kings” Will Be Held at the DC Armory Mall, Friday, June 10

Washington, DC (June 9, 2016) – As the official convention and sports authority for the District, Events DC will host a Muhammed Ali tribute screening of “When We Were Kings: The Untold Story of the Rumble in the Jungle” on Friday, June 10 at the DC Armory Mall. The viewing will begin at 6:00 p.m. and is a free community event. Attendees are encouraged to bring blankets, lawn chairs and snacks. Events DC will be providing a limited supply of complimentary water and popcorn.

The DC Armory Mall is located across from the DC Armory (2001 E. Capitol Street, SE.) and is accessible via Metro on the Blue, Orange and Silver lines or bus service to “Stadium-Armory.” Limited on-site parking will be available and car sharing services will be designated in front of the DC Armory.

“When We Were Kings” is a documentary of the 1974 heavyweight championship bout in Zaire, affectionately dubbed, “The Rumble in the Jungle,” between champion George Foreman and underdog challenger Muhammed Ali. The trailer for this academy award winning best documentary feature can be found here: http://www.imdb.com/title/tt0118147/?ref_=ext_shr_tw_vi#lb-vi585236761.

In the event of inclement weather, updates will be available on www.eventsdc.com or Events DC social media channels, Facebook (Events DC), Twitter (@ConventionsDC and @DCSportsEnt) and Instagram (@EventsDC).

About Events DC
Events DC, the official convention and sports authority for the District of Columbia, deliver premier event services and flexible venues across the nation’s capital. Leveraging the power of a world-class destination and creating amazing attendee experiences, Events DC generates economic and community benefits through the attraction and promotion of business, athletic, entertainment and cultural activities. Events DC oversees the Walter E. Washington Convention Center, an anchor of the District’s hospitality and tourism economy that generates over $400 million annually in total economic impact, and the historic Carnegie Library at Mt. Vernon Square. Events DC manages the Stadium-Armory campus, which includes Robert F. Kennedy Memorial Stadium and surrounding Festival Grounds, the non-military functions of the DC Armory and Maloof Skate Park at RFK Stadium. Events DC also built and now serves as landlord for Nationals Park, the first LEED-certified major professional sports stadium in the United States. The most recent addition is Gateway DC, an innovative and versatile space featuring a covered and open-air pavilion in the center of a 1-acre park, conveniently located in the Congress Heights neighborhood of Washington, DC. For more information, please visit www.eventsdc.com or find us on social media – Facebook (Events DC), Twitter (@ConventionsDC and @DCSportsEnt) and Instagram (@EventsDC).

About OCTFME
The District of Columbia Office of Cable Television, Film, Music and Entertainment is responsible for implementing, managing, and administering programs, initiatives, and services that support media industry economic activity, growth, and employment in the District of Columbia. Washington, D.C.’s instantly recognizable landmarks, diverse neighborhoods, cultural amenities, and first-class accommodations are just some of the many features that make the nation’s capital a venue of choice for media production. For more information, contact the Office of Cable Television, Film, Music and Entertainment at (202) 727-6608, visit us on the web at http://film.dc.gov, join the D.C. Film community on http://www.facebook.com/entertainDC , or follow us on http://twitter.com/Film_DC.