Washington, D.C., April 18 – Preparing to combat that time of year when, according to the National Highway Traffic Safety Administration (NHTSA), nearly a third (31%) of all U.S. traffic deaths involve drunk drivers*, free Lyft rides will be offered to deter impaired driving throughout the Washington-metropolitan area on Cinco de Mayo (May 5th).

Offered by the nonprofit Washington Regional Alcohol Program (WRAP), the 2017 Cinco de Mayo SoberRide® program – now in its third year — will be in operation beginning at 7:00 pm on Friday, May 5, 2017 and continue until 4:00 am on Saturday, May 6, 2017 as a way to keep local roads safe from impaired drivers during this traditionally high-risk holiday.

During this nine-hour period, area residents age 21 and older celebrating with alcohol may download Lyft to their phones, then enter the code CINCODC in the app’s “Promo” section to receive their no cost (up to $15) safe transportation home. The SoberRide code is valid for the first 1,500 Lyft users who enter the code.

(In March 2017, WRAP announced a partnership with the ridesharing service Lyft to provide WRAP’s SoberRide service in the Washington-metropolitan area through 2017. SoberRide, the popular free safe ride service to prevent drunk driving, will now be solely available via the Lyft mobile app ridesharing platform.)

SoberRide is offered throughout Lyft’s Washington, D.C. coverage area which includes all or parts of: the District of Columbia; the Maryland counties of Montgomery and Prince George’s; and the Northern Virginia counties of Arlington, Fairfax, Loudoun and Prince William.

More information about WRAP’s SoberRide initiative can be found at
www.soberride.com. 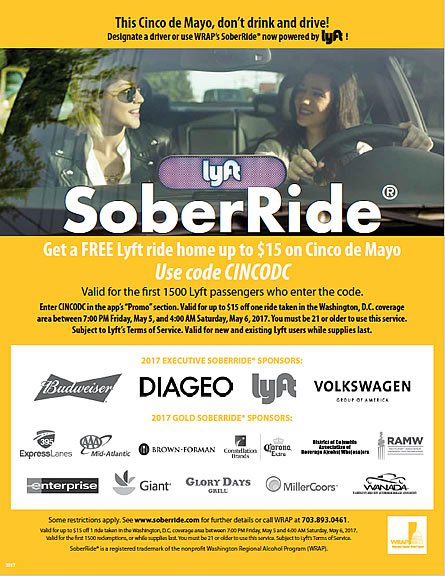