New City Stage Company is pleased to announce the of the 2015-2016 Season, the world premiere of ROSEBURG, written and directed by award-winning theatre artist Ginger Dayle. This play parallels a speech Senator Robert F. Kennedy made on gun control in Roseburg, Oregon during his 1968 presidential campaign and the tragic Umpqua community college shooting in 2015 in the same town.

Hailed as “a fever dream of political theatre,” the Philadelphia Inquirer said “it’s timeliness is eerily unsettling.” Featuring television actor Russ Widdall of HBO’s The Wire as Robert F. Kennedy, who played the title role in RFK, a hit of the 2013 Capital Fringe Festival.

ROSEBURG is written and directed by New City Stage Company founder and emerging American playwright Ginger Dayle. The show received a workshop production in July 2016 at the Adrienne Theatre in Philadelphia in conjunction with the Democratic National Convention. The production was sponsored by the DNC as well as Temple University’s School of Theatre, Film and Media Arts and featured an ensemble of student actors along with tv and film actor Russ Widdall in the role of Robert F. Kennedy. Ms. Dayle researched the play by examining Robert F. Kennedy’s personal papers at the John F. Kennedy Presidential Library in Boston and by reading the writings of and interviewing the families and friends of shoot shooters, including Sue Klebold, the mother of Columbine shooter Dylan Klebold.

The show received critical praise across the board with Philadelphia Magazine calling it “a heartfelt work-in-progress” that is “rational and balanced.” The Broad Street Review said the play “advances the discussion” on gun control. The Philadelphia Inquirer called it, ” a fever dream of political theater, and its timeliness is eerily unsettling.”

The Ms. Dayle received numerous threats to her safety and that of the theatre from many Roseburg residents who wrongly assumed she was writing an exploitative piece about their community. Not only did they get that wrong but the publicity drove much attention to the production and Ms. Dayle did over 20 television and radio interviews, including an NPR feature where she was a panelist along with Bobby Kennedy biographer Larry Tye. The show is slated to have several regional productions after its professional premiere in the 2017 Capital Fringe Festival.

Ginger Dayle helmed New City Stage’s Philadelphia premiere of RFK for the 2012-13 season, a sold-out hit which then premiered in Washington, D.C. at the Studio Theatre in July 2013, and returned to Philadelphia in the fall of 2013 for another sold-out run. Ms. Dayle won the 2013 Broadway World Award for Best New Work for directing RFK, which was her directorial debut. She is also the writer-director of the controversial bio-drama HINCKLEY, about the media’s role in John Hinckley Jr.’s assassination attempt on President Ronald Reagan. She is currently writing a commissioned piece on the Kennedy-Nixon presidential debates for the JFK Presidential Library. She is a leading Kennedy historian in the theatre community whose family members worked for the Kennedy administration. She studied Economics and Theatre at the University of Pennsylvania.

TV and film actor Russ Widdall starred as Bobby Kennedy in the hit one-man show RFK and has always had a passion for politics and theatre, and is thrilled to be reprising this role for Roseburg. He is also the Artistic Director of New City Stage company and has starred in several films and tv shows, including “The Wire.” He has become well-known for the role of Bobby Kennedy in several plays and films, with the Washington Post said, “Russ Widdall’s portrayal of a man trying to honestly change the world for the better is convincing and, of course, tragic without an awareness of its tragedy.” DC Theatre Scene said, “Russ Widdall’s transformation into RFK is seamless… Widdall doesn’t act like RFK, he becomes him.”

On May 27, 1968, Presidential Candidate Robert F. Kennedy gave a speech on gun control on the steps of the courthouse in Roseburg, Oregon. He was heckled and went on to lose the Democratic primary… Less than 2 weeks later his life would be cut short by an assassin’s bullet.
Almost 47 years later on October 1, 2015, the sleepy logging town found itself in the spotlight of the second amendment controversy yet again. A mentally disturbed student opened fire in a classroom at Umpqua Community College killing nine and injuring several more before turning his gun on himself.

Roseburg examines the simmering synapses between the gun control argument of the Vietnam era and its stepchild; the modern Twitterverse, that holds any and every conflict under the microscope of bipartisan disdain and infotainment ennui. Why are we still arguing about this and when will the killings cease?

“With all the violence and murder and killings we’ve had in the United States, I think you will agree that we must keep firearms from people who have no business with guns or rifles”
–Robert F. Kennedy, 1968

Please request all interviews and complimentary press tickets at least 24 hours in advance.

New City Stage Company, founded in 2006, is dedicated to presenting high quality professional theatre that engages audiences on a variety of levels; not only entertaining them but also encouraging awareness of issues relevant to the community. We draw our season from contemporary and classical works, with a special focus on including Philadelphia premiers from playwrights whose work and stories are not normally found in the region. 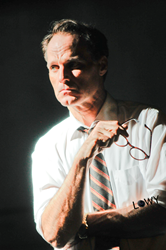