For the past 25 years, tens of thousands of people have flocked to our nation’s capital to celebrate the “Official Start of Summer” at the Giant® National Capital Barbecue Battle, one of the largest and most unique food and music festivals in the country.

Washington’s tastiest summer celebration pays tribute to everything barbecue and truly embodies the best that America has to offer. In addition to bringing together thousands of BBQ fans from around the country, the Giant® Barbecue Battle has raised millions of dollars for area charities. Funds raised from this year’s event will benefit USO Metro and the Capital Area Food Bank.

Make sure to arrive at the festival hungry as the event offers plentiful free BBQ & grilled food samples in the Taste of Giant® Sampling Pavilion, Giant® Local Flavors Tent and throughout the event site. Popular BBQ restaurants from around the country will also be on-hand serving up delicious BBQ chicken, pork, ribs and brisket. To quench everyone’s thirst, the event will feature the Giant® Corks to Caps Wine and Micro-Brew Sampling Tent, Ravage Wine Samples, a variety of Anheuser-Busch beverages and popular non-alcoholic drinks.

The 2018 Giant® National Capital Barbecue Battle is heating up to be the biggest and best tasting yet, so mark your calendar for June 23rd and 24th and bring the whole family to DC’s favorite celebration of the art of BBQ. Visit us at http://www.BBQinDC.com. We’ll see you at the BBQ! 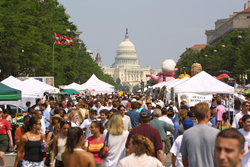