SOURCE: Save the Storks or prnewswire.com

COLORADO SPRINGS, Colo., Dec. 11, 2018 /PRNewswire/ — Save the Storks, a pro-life organization partnering with pregnancy resource centers to empower women through education with choice during pregnancy, will be hosting their premier black tie fundraising gala, the Stork Charity Ball, on January 17, 2019 in Washington D.C. Together, guests will dine and celebrate the 5000+ lives that have been saved on mobile medical units, also known as Stork Buses. Save the Storks founder and CEO Joe Baker will share the organization’s 2019/2020 vision for empowering pro-life Americans with measurable, quantifiable, and easily-accessible ways to make an impact on would-be mothers and their babies’ lives.

“As hundreds of thousands descend on the nation’s capital on the eve of the March for Life, we’re honored to bring together supporters and influencers of the pro-life movement at the Stork Ball,” said Save the Storks founder Joe Baker. “We want to shine a light on all who have stepped up as revolutionizers of the pro-life movement and honor the women and men who tirelessly work towards the goal of making abortion unthinkable.”

Thousands of women have changed their mind about abortion after visiting a Stork Bus. Why? Going mobile is a proven method to reach women contemplating abortion, as many of them have never heard of pregnancy centers or the resources offered there. Save the Storks fully funds an innovative fleet of luxury Mercedes-Benz mobile medical units known as Stork Buses that allow pregnancy resource centers to reach these abortion-vulnerable women with love, compassion, and hope in their moment of need wherever they are likely to be – outside of clinics, on university campuses, and at public events. These mobile pregnancy centers minimize the distance and roadblocks between women who most need the help of a pregnancy resource center. To date, Save the Storks has funded 47 buses, with over 5,000 women choosing to keep their babies.

“Had information and resources like the Stork Bus been available to me when I was a young mother in crisis, I would have made vastly different choices,” said Victoria Robinson, Director of External Relations at Save the Storks. “Every would-be mother has a fundamental right to understand all of her options during pregnancy, and we can’t wait to see how expanding on the impact of Save the Storks will transform countless lives…forever.”

About Save The Storks

Save the Storks’ mission is to revolutionize the meaning of pro-life. This organization partners with pregnancy resource centers in the United States to empower women with choice during pregnancy. Save the Storks has captured the imagination of millions with their compelling Heartbeat and Father’s Day videos and with its innovative fleet of Mercedes-Benz Mobile Medical Units, known as the Stork Bus. To date, Save the Storks has built 47 buses, with three additional Stork Buses in production and nine in fundraising. Storks by the Numbers:

79% of women say they weren’t counseled on other options outside abortion. (Heartbeat International)
73.8% of women experienced pressure to abort their babies. (Journal of American Physicians and Surgeons)
4 out of 5 women who board a Stork Bus choose life for their baby. (Reporting affiliate Pregnancy Resource Centers)
SOURCE Save the Storks 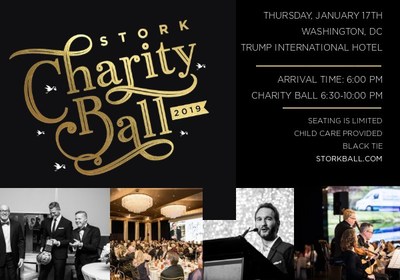 Previous post ‘Roma’ Feels the Love with D.C. Film Critics
Next post District to Remain Open in the Event of a Federal Government Shutdown