The Vietnam War, a divisive and controversial conflict, had a profound impact on the art of its time. “Artists Respond: American Art and the Vietnam War, 1965–1975” emphasizes how American artists grappled with the dilemmas of the war as it was unfolding—from President Lyndon B. Johnson’s fateful decision to deploy U.S. ground troops to South Vietnam in 1965 to the fall of Saigon 10 years later. The exhibition makes vivid an era in which artists endeavored to respond to the turbulent times and openly questioned issues central to American civic life.

“Artists Respond” is the most comprehensive exhibition to examine the contemporary impact of the Vietnam War on American art. The exhibition is unprecedented in its historical scale and depth. It brings together 115 objects by 58 of the most visionary and provocative artists of the period. This exhibition presents both well-known and rarely discussed works and offers an expanded view of American art during the war, introducing a diversity of previously marginalized artistic voices, including women, African Americans, Latinos and Asian Americans.

“Artists Respond” is organized by Melissa Ho, curator of 20th-century art at the Smithsonian American Art Museum. The exhibition is presented in conjunction with an installation by internationally acclaimed artist Tiffany Chung, organized by Sarah Newman, the James Dicke Curator of Contemporary Art at the museum. “Tiffany Chung: Vietnam, Past Is Prologue” probes the legacies of the Vietnam War and its aftermath through maps, paintings and videos that share the stories of former Vietnamese refugees. “Artists Respond” is on view March 15 through Aug. 18; “Vietnam, Past is Prologue” is on view March 15 through Sept. 22.

“At the Smithsonian American Art Museum, we are committed to creating groundbreaking exhibitions and exploring lesser-known chapters of American art to expand our understanding of American visual culture,” said Stephanie Stebich, the Margaret and Terry Stent Director at the Smithsonian American Art Museum. “This long-awaited exhibition provides a needed reevaluation of this time period and the changes in American art that are still present today.”

“Present-tense works of art from the Vietnam War era reflect the moral questioning and spiritual pain of that time,” Ho said. “Recounting the turmoil of the Vietnam War era reminds us that many of the social and political ruptures we live with today have roots in that moment. The art speaks of the past, but it is a past whose tremors still animate our present.”

The exhibition’s presentation includes a dedicated interpretative space that offers visitors a place to reflect on the artworks on display and the era. This space contains a timeline of cultural and political events and a response wall that invites visitors to share thoughts about the material in the exhibition.

“ARTISTS RESPOND”: A SYMPOSIUM
Friday, March 15, from 9 a.m. to 5:30 p.m., the museum has organized a day of discussions and lectures on topics related to the exhibition “Artists Respond.” A group of distinguished scholars will provide insights into how artists of the Vietnam War era sought to engage, and artists whose work is in the exhibition will address their varied experiences of the war period. Information about speakers and a detailed schedule for the symposium is online at americanart.si.edu/artistsrespond.

PUBLIC PROGRAMS
The museum has planned a robust series of public programs in conjunction with the museum’s spring exhibitions. Ho will give a gallery talk in the exhibition Thursday, March 28, at 5:30 p.m. Ho and Harry Rubenstein, curator emeritus of political history at the Smithsonian’s National Museum of American History, explore the influence of mass media on American art and politics during the Vietnam War era Tuesday, April 9, at 6 p.m. Newman and Lawrence-Minh Bùi Davis, curator and historian at the Smithsonian’s Asian Pacific American Center, discuss the lasting impact of the Vietnam War on Southeast Asian Americans Thursday, May 9, at 6 p.m. Both gallery talks are part of the museum’s series “Double Take: One Artwork Two Viewpoints.”

Chung will give the museum’s annual James Dicke Contemporary Artist Lecture Thursday, May 2, at 6 p.m. She will discuss her new installation that probes the legacies of the Vietnam War and its aftermath through maps, videos and paintings that highlight the voices and stories of former Vietnamese refugees.

Artist and writer Việt Lê offers his perspective on contemporary art and the legacy of the Vietnam War in a talk titled “Returns, Refugees and Refusal: Art, War Memory and the Politics of Representation” Thursday, May 23, at 6 p.m.

Film screenings include The Anderson Platoon (1967, 65 minutes), directed by Pierre Schoendoerffer, Wednesday, April 17, at 7 p.m. followed by a post-film conversation with the film’s subject Lt. Joseph B. Anderson. In the Year of the Pig (1968, 104 minutes), directed by Emile de Antonio, will be presented Friday, May 10, at 7 p.m. and Saturday, July 27, at 7 p.m.; the May screening includes an introduction and discussion with Erica Levin, assistant professor of the history of art at The Ohio State University. North Star: Mark di Suvero (1978, 54 minutes), directed by François de Menil and Barbara Rose, will be screened Saturday, July 13, at 3 p.m.

BOOK
The exhibition catalog features essays by Ho; Thomas Crow, the Rosalie Solow Professor of Modern Art at the Institute of Fine Arts, New York University; Erica Levin, assistant professor of the history of art at The Ohio State University; Katherine Markoski, independent scholar; Mignon Nixon, professor of modern and contemporary art at University College London; and Martha Rosler, artist and author. It is published by the Smithsonian American Art Museum in association with Princeton University Press. The book is available for purchase in the museum store and online ($65, hardcover).

TOUR
Following the presentation in Washington, D.C., the exhibition will travel to the Minneapolis Institute of Art where it will be on display from Sept. 28 through Jan. 5, 2020. 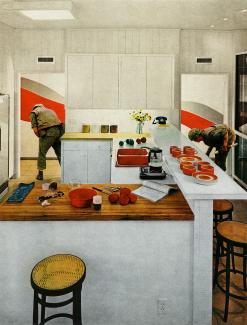