During the four-week period, through Sunday, April 14, trains on all Metrorail lines will run at regularly scheduled intervals, departing end-of-line stations every 12 minutes on Saturdays and every 15 minutes on Sundays. At stations served by multiple lines (e.g. Downtown DC), trains will arrive every 4-7 minutes. On the Red Line, trains will run as frequently as every 6 minutes between Shady Grove and Silver Spring during daytime hours.

“During large events – whether Cherry Blossom season or the Capitals’ Stanley Cup run – there is no better way than Metro to move large numbers of people quickly and efficiently,” said Metro General Manager and Chief Executive Officer Paul J. Wiedefeld. “Taking a break from daytime track work makes Metro the best way to see the blossoms without worrying about traffic or parking.”

In honor of the 2019 National Cherry Blossom Festival, Metro will release a limited-edition SmarTrip card, available in specially marked fare vending machines at selected stations beginning today with all 91 stations by March 20. The cards feature an iconic image of the Jefferson Memorial surrounded by cherry blossom trees in peak bloom along the Tidal Basin.

During cherry blossom season, weekend off-peak fares will be in effect and parking will be free at all Metro parking facilities.

Metro may begin overnight track work after 10 p.m. when ridership is lighter.

Trains and stations are more crowded during Cherry Blossom season, particularly during peak bloom. To avoid crowds and to make your trip smoother, consider the following:

On weekdays, consider traveling during non-rush hour times when trains and stations are less crowded. Avoid traveling during the height of the afternoon peak period, from 4 to 6 p.m.
Smithsonian Station is the closest station to the Tidal Basin and can become extremely busy. To avoid crowding, consider using L’Enfant Plaza or Federal Triangle instead.
Avoid potentially long lines at vending machines by purchasing a SmarTrip card ahead of time online at wmata.com/SmarTrip, designated retail locations or any of Metro’s 91 stations. Allow 5-10 business days for online orders. (Limited Edition Cherry Blossom Festival SmarTrip cards available in stations only)
Each passenger 5 years of age or older needs his or her own SmarTrip card. Be sure to load enough value on the card to pay for all trips you plan to take. 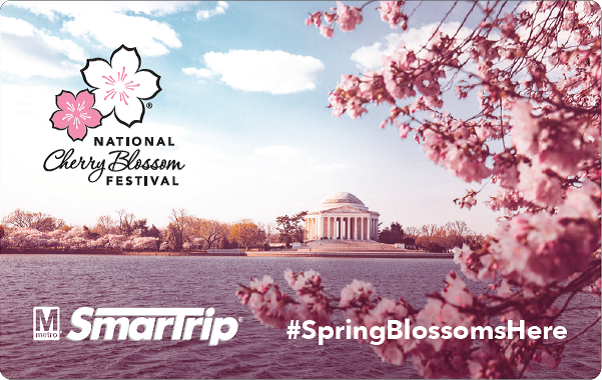